We recently launched our mobile site! Now you can easily view our website, choose a vehicle and make reservations from any mobile device. With the all new Best mobile site, the ease and reliability of booking with Best Chauffeured is always right at your fingertips. Check out our new mobile site from any mobile device to see the new way that Best is going beyond transportation. To celebrate we are offering 15% off a single Local Southern California Service. 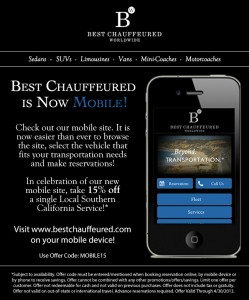 Lamborghini may be branching out from their traditional sports cars. They have released a concept of a Lamborghini Aventador Limo. The video of this concept car has already received over 500,000 views and, with proper investment, this premium limousine may materialize in the future.

Read the full article at: http://www.thechauffeur.com/limo-concept-video-shows-companys-future-vision/

Long Beach Airport is preparing to update their terminal to provide a more modern, comforting and inviting airport experience. The remodel and expansion will include new shopping and dining facilities, as well as a garden at the center of the terminal. Long Beach Airport is going to try to complete the remodel without any disruptions in service, and Best Chauffeured will continue to provide airport transportation during this time.

Read the full article at: http://www.lgb.org/travelers/terminal_modernization.asp

General Motors has announced plans to make a limousine version of the Cadillac XTS. In addition to this, GM is hoping to make the Cadillac XTS the preferred sedan for chauffeur and charter companies, replacing the Lincoln Town Car that went out of production in 2011. Best Chauffeured is planning to expand its fleet to include the Cadillac XTS as a luxury sedan.

Read the full article at: http://www.carscoops.com/2012/01/cadillac-plans-to-take-over-limo-market.html

The recent Detroit Auto Show offered consumers insight to what they can expect in 2013 from the automotive world. Some concept cars were revealed that bordered on absurdity, while others gave consumers hope for the future of automotives. The Acura NSX Concept stunned audiences with its sleek style and promise to be the next supercar released by Honda Motors. The 2014 Chevrolet Corvette Stingray is ranked number 1. With an all-new 6.2L LT1 V8, the new Corvette Stingray boasts 450hp and 450 lb-ft of torque.

Check out these models and the rest of the top 10 here: Top 10 Cars of the 2013 Detroit Auto Show