To help kick off the summer right, Best Chauffeured would like to extend a special offer to all of our customers. Take 15% off on a single, local Southern California service during the month of June. Use offer code JUNE15. See details below! 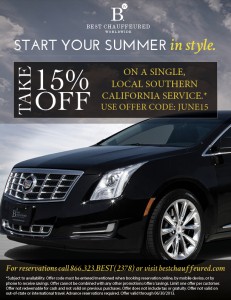 International travel just got easier at John Wayne Airport. Earlier this month, John Wayne Airport and U.S. Customs and Border Protection (CBP) announced that a Global Entry kiosk is now in operation for travelers arriving from international destinations. Passengers that are pre-assessed as low-risk can take advantage of the expedited CBP clearance. John Wayne Airport announced that they are striving to make travel as efficient and convenient as possible. As one of the most trusted transportation partners in Southern California, Best Chauffeured is also striving to make your traveling effortless. When flying into or out of John Wayne Airport, let Best Chauffeured improve your travel experience. Make a reservation now at: https://besttransres.liverycoach.com/Login.aspx?ReturnUrl=%2fClient%2fTripHistory.aspx

Read more about the Trusted Traveler Program at John Wayne Airport at: http://ocair.com/NewsRoom/News/2013/NR-2013-05-07.aspx

DOT/Trucking Regulations Safety Training Videos assist in the training of all employees whom handle, transport or may come into contact with hazardous materials. The training consists of everything from controlling a skid to HAZMAT Security awareness. Other products such as the Department of Transportation’s HAZMAT Training regulation on Handling and Transporting Hazardous Materials, provide the information necessary to comply with the regulation’s “General Awareness” training requirement.

For more information or to view the videos, visit http://complianceandsafety.com/shop/c-transportation-and-dot-32-1.html

Mercedes-Benz revealed the all new S-Class in Germany. This amazing vehicle is set to hit American showrooms in September of this year. Many elements of the new S-Class were adapted from it’s predecessors, with several modifications and improvements. The most notable area of improvement is the electronics, which will also assist in improving vehicle safety. Best Chauffeured is proud to own the current Mercedes-Benz S-Class and looks forward to the release of the new version in the United States. 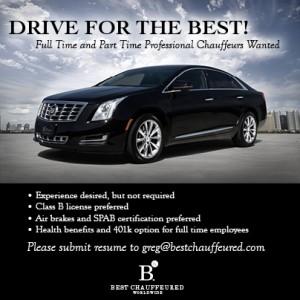 You can relax while we take care of the details.

Read more and see the study about L.A. traffic congestion at: http://www.nbcnews.com/business/la-edges-out-honolulu-worst-traffic-6C9823843

As Mercedes-Benz continues to improve the Sprinter, they decided to take a look back at the history of this luxury van. The restored 1960 L319 was the grandfather to the Sprinter, which was first released in 1995. The restored L319 is complete with simple steel wheels and wood cargo floor. Since then, the Sprinter has evolved into a luxury vehicle equipped with plush leather seating, polished wood interior moldings, an LCD monitor and DVD player with Surround Sound. Best Chauffeured has this modern Sprinter available for any medium sized group. Reserve one for your next event at https://besttransres.liverycoach.com/

Plus, check out the restored 1960 Mercedes-Benz L319 at: http://blog.caranddriver.com/mercedes-benz-traces-lineage-of-sprinter-with-restored-1960-l319-panel-van/

Every year, Ward’s Automotive has it’s staff pick the best interior for any new or significantly improved car. They recently released the top 10 interiors of 2013. They started with 46 vehicles that were either new or had improved their design and technology enough to be considered. It is no surprise that the Cadillac XTS, which Best Chauffeured recently added to our Fleet, made the Top 10 list. This vehicle offers supreme comfort and all the features a driver or passenger could want. Reserve the Cadillac XTS today at: https://besttransres.liverycoach.com/Login.aspx?ReturnUrl=%2fClient%2fTripHistory.aspx

Motor Trend recently compared the new Acura RLX to the Cadillac XTS4. Each sedan has areas where it outshines the other, but overall, the Cadillac XTS4 was crowned the better vehicle. Motor Trend compared elements of exterior styling, interior comfort, handling and power. It is no wonder that Best Chauffeured added the Cadillac XTS to its fleet in order to continue providing superior service to clients.

See the comparison at: http://www.motortrend.com/roadtests/sedans/1304_2014_acura_rlx_vs_2013_cadillac_xts4_comparison/